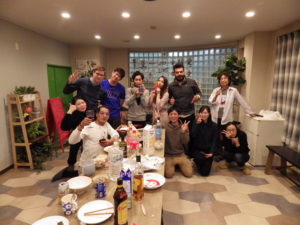 Hello. We hold an event about once a month. I am Kato, in charge of Minami-Urawa.

February 3rd. this is a day called, “Setsubun”, not a holiday, but an important cultural day for our Japanese people!! That’s way we held a Setsubun-party, responding to the requests to the residents here＾＾

With the helps of the residents, we momentarily changed the living room into the party-style one, and the party began. 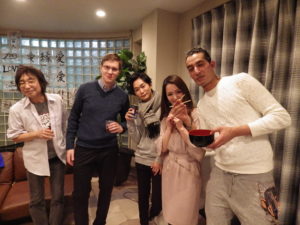 Some minutes after “cheers”, the sign of the start, one of the residents put on a mask of ogre. (We traditionally throw beans at disguised ogres and gets them out, shouting, “Oniwa-soto, Fukuwa-uchi”, literally meaning, “Ogre, go out, happiness, come in”.

We, of course, had prepared beans.

We all started throwing the beans at the ogre all together.

Shouting “Oniwa-soto”, some of us threw the beans with full power. lol

The ogre, who suffered the bean attacks, got mad and threw the beans back at us. The attack and defense went on for some minutes and the floor flooded with beans. 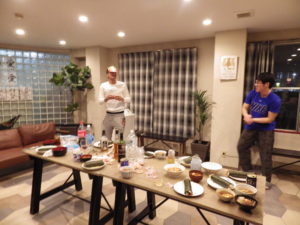 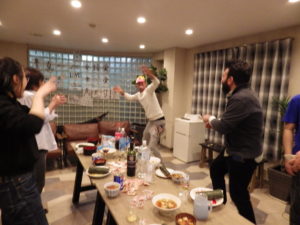 After the short-term calm, we swept away the floor, collected the beans scattered, and the battle re-strated. lol

After the fights, it is the time for cooking, which was the one all of us were waiting for.

First, we cooked Kenchin-Jiru, a soy-bean soup made with fried vegetables.

Soy sauce, stock liquid and vegetables… it was really easy to cook it. 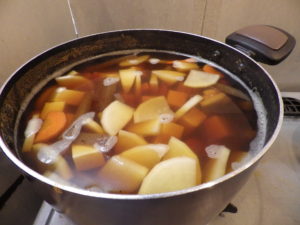 Next, hand-rolled sushi, so-called “Temaki-zushi”, each of us cooked this type of sushi.＾＾ (We traditionally not only throw beans, but also eat hand-rolled sushi, looking at the lucky direction of the year. By doing this, it is believed that we can spend the year without unhappiness or disasters.)

The hand-rolled sushi, which Japanese people traditionally eat at this time of the year, is specifically called Eho-maki, meaning a lucky direction sushi roll. This is my first experience to cook it by myself!!

Of course, it was the first experience as well for some of the residents. They were serious,  and when completed, they made smiles on their faces. 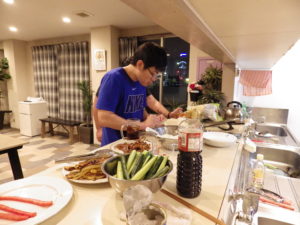 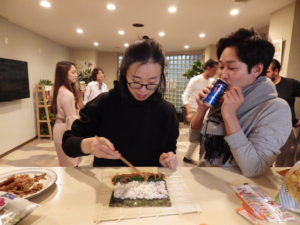 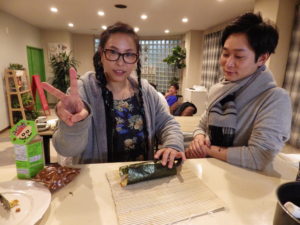 Their faces are really nice when cooking it.＾＾

After all of us finished cooking, we turned to the direction south-southwest, and ate their own hand-rolled sushi with a wish!! 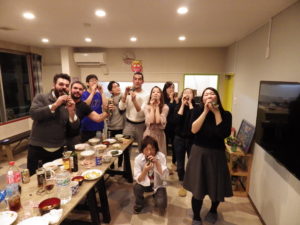 This is a fabulous party as well as the last time.

Some of our recent parties include workshops that everyone can participate in.

The last time, we held a workshop of the New Year’s calligraphy, and the residents understood one of our Japanese cultures.

Receiving good reviews, I was glad that more non-Japanese residents joined than usual. We will try to hold other parties like this.

Thank you for reading!!