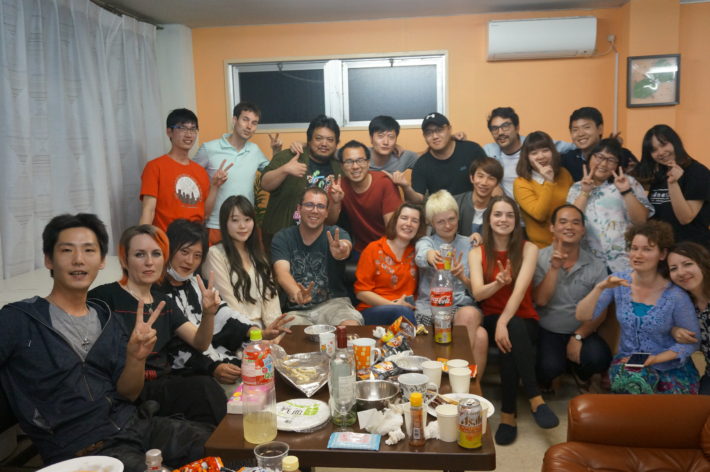 Yokohama city where our office is located in is getting hotter and hotter these days.

Yes, it’s me who is very sweaty this season every year…

And at First House Fujigaoka, it was planned to be “an annual BBQ party” … but I knew that one of the residents who is moving out was going outside the Kanto region tomorrow, so the name of this party changed from “The annual BBQ Party” to ” Farewell Party” 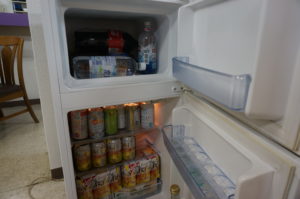 Since it is BBQ, we purchased a lot of sake and other alcohol which people may love.

However, every time we hold a party, we buy too many drinks so we bought less this time.

Of course, we bought beer, and other sweet alcohol and some juice for those who don’t drink much and for those who cannot drink alcohol. 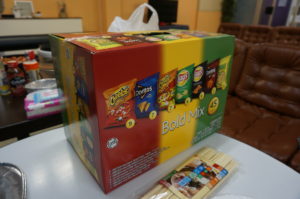 And, one of the residents brought snacks and chips for us!

Thanks to this, we don’t need to buy ones. lol

As we guessed, they are all gone to their stomachs. 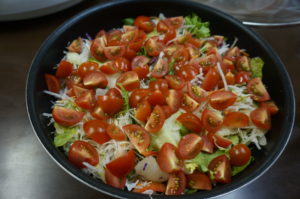 The main dish is meat because it’s BBQ but some people may say “We cannot eat only meat!”

So we made a easy vegetable salad!

If it’s only me preparing for the party, I cannot do these things.

I really appreciate the residents! 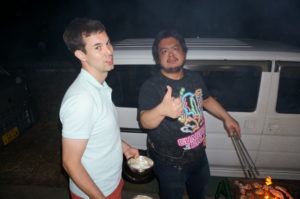 The unit of grilling is here.

These two guys has attended all parties we have done so far!

And they help me from the beginning to the end such as shopping and cleaning after a party. 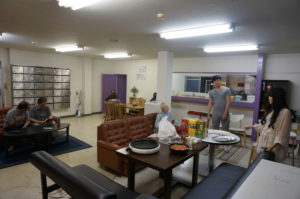 The residents are getting gathered in the lounge.

We feel the lounge here is huge even though there are sofa, and some tables and chairs.

There seems to be some residents who have started drinking already, but it seems that they drank sake brought by themselves. 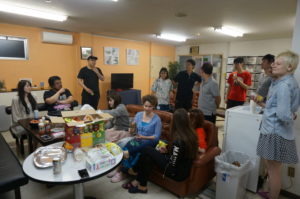 More and more residents are coming.

As you see the picture, you may know that they can’t wait for the party starting.

I’m glad to have these residents here. The party was planned to start at 7 PM but a few residents were late because of their works and private things.

Some of them were rushing into the party.

“Don’t worry. Thank you for being hurrying to be back here.”

We took a picture with all participants! (As always)

This must be a good memory for us. 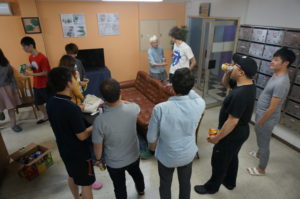 As I guessed, since there are lots of people, they were separated into some groups. But they were moving and walking around, so they seemed to be able to talk to each other.

“I know other residents’ face but didn’t have a chance to talk. Just greetings”

This party must be good for people like this.

As you see the pictures, the participants are mostly not Japanese but foreigners.

There were only 5 Japanese here. lol

More than 50 % of residents are foreigners!! How about the unit of grilling outside?

Some people cannot eat beef due to their religion, so we didn’t buy beef this time.

Pork and chicken are the main dish and we grilled sea foods such as squid and shrimp.

The unit of grilling were kind of panicked because the meats and sea foods were gone to residents’s stomachs as soon as they made. In the lounge, she is cooking fried noodles.

We prepared many carbohydrates because we think that residents would not be full not only with meats and vegetables.

Thank you for helping us! It is Nata (the middle in this picture) of the main of today’s “Farewell Party”.

She lived nearly a year, but she will move out since she got a job.

She is fluent in Japanese and she has a great vocabulary skill.

I always think “Where did you learn such a word?” 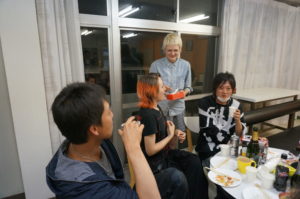 She may experience a lot of things but I hope she will lead a wonderful life in Japan with her great smile! By the way, what is she eating?

Another resident bought it because it’s a funny snack. 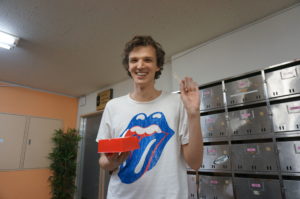 He seems to love it more than Nata. lol He is giving it to other residents…

I didn’t take a photo of when they ate it. But some people like it but others don’t…

I used to love it when I was a child.

It was fun to make it rather than its taste. “Let’s take a picture together not just be a camera man!”

This moment was fun for me, drinking alcohol and being surrounded by ladies. lol To make the party more exciting, one resident brought speakers!

Since it is a party where people from various countries participate, they were running the music of each country, singing famous songs which are common to all the world with dancing. Residents invited friends, and so nearly 25 people in total participated this farewell party!

Some people came from outside the prefecture, and there was a conversation between residents who did not usually talk.

It is also a good opportunity for everyone, I think this must be a good memory.

I think that there are not many properties with high multinational / foreigner rates.

If you are interested in cross-cultural interactions, I think that Firsthouse Fujigaoka is a recommended sharehouse!